Two CREW staff and one board member at Eye Radio in Juba during a talkshow on violation of women’s rights in South Sudan.

After decades of war and in the wake of recent conflict, South Sudan has seen a deterioration in the rule of law translating into rampant looting, targeted and ethnic killings, as well as a spread in hunger, diseases and its related deaths, prompting citizens to seek refuge in neighboring towns and countries and thousands internally displaced with women and children bearing the brunt of the violence in its after effects.

AT Eye Radio discussing cultural norms in relation to implementation of women’s rights.

CREW uses its platform to amplify the voice of those who suffer these injustices by advocating and raising awareness on issues of women and children’s rights on radio and other media outlets as well as on social media platforms (Facebook: Crown The Woman-South Sudan & Twitter: @CrownTheWoman)

One CREW staff at Miraya FM during a talkshow on mentorship and girl child education.

We also engage with likeminded institutions to ensure key issues affecting women and children are highlighted as part of our efforts at mainstreaming gender and paving way for meaningful gender equality and equity in South Sudan. 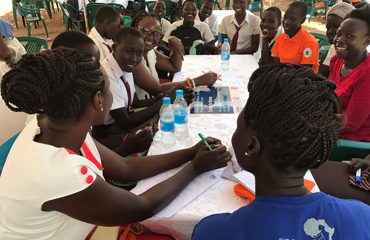