“You never know what someone is going through especially a girl until they speak up and that’s when you realize the problems they held inside their hearts are bigger than their age and body, we cried and laughed together” says Nyaboth Paska, one of our girls’ mentors after her two-day session with her group of girls.

Trauma has affected every individual differently in South Sudan and it is attributed to the protracted civil war. Traumatic experiences and recurrent conflict has had negative impact on young people especially girls. Lack of protection of children and young people creates fear and makes individuals vulnerable with fundamental alterations to the way they view the world. Such trauma tends to be interpersonal as its attributed to domestic violence, sexual abuse, neglect and/or exploitation, discrimination and financial challenges at family level, watching brothers being abducted and forced into militia among several issues these young girls mentioned. Due to the damage done to their core identity, young traumatized girls often experience low self-esteem, lack of self-compassion, guilt, and remorse. They struggle with a dysfunctional worldview that depicts the environment as unsafe and therefore it is dangerous to trust others or themselves.

These young girls experience overwhelming, unpredictable, and intense emotional reactions such as anger, anxiety, shame, frustration, and depression which all affect their performance in school and some eventually drop out of school.

Girls writing their problems on the balloons and blowing it until it bursts, a sign that they were going to let go of all their problems by the end of the two-days workshop

Crown the woman acknowledges the above negative impact of trauma in girls and its effect on their performance in school and therefore, designed an intervention to support secondary school going girls to adopt positive coping mechanisms and heal the trauma. The intervention focuses on working with ten (10) trained mentors to support the physical, spiritual, emotional and intellectual well-being of the girls.

The mentors conducted a two-day workshop at Women’s Union for 242 secondary school girls from three schools namely: Don Bosco, Promise Land and Juba Day secondary school. Conducting the sessions out of school, in smaller groups with the trainers further encouraging those who don’t feel ready and comfortable enough to share their issues before the group to write on paper and had private one-on-one sessions with each of them over tea and lunch breaks gave the girls the confidence to participate and speak up. The mentors were able to help the girls understand Trauma and Trauma overview, Symptoms and triggers of trauma, wounded-ness and psychosocial well-being, Mindfulness and the phases of healing, how to respond to trauma with self and among youth and children, Emotional regulation, Mentoring and support system, Safety and relationships, IASC guidelines on mental health and Communication and Self-care.

The objectives of the workshop were to:

Mentors in their respective groups with their queens (girls)

“You never know what someone is going through especially a girl until they speak up and that’s when you realize the problems they held inside their heart are bigger are bigger than their age and body, we cried and laughed together” says Nyaboth Paska one of our girls’ mentors after her two-day session with her group of girls.

Some of these girls are fighting unimaginable battles and have no one to talk to. Speaking up is the first phase of the healing process and having someone to confide in is simply all these girls need sometimes. It was two emotional days filled with tears and laughter, a weekend truly well spent indeed.

HEALED TO HEAL OTHERS 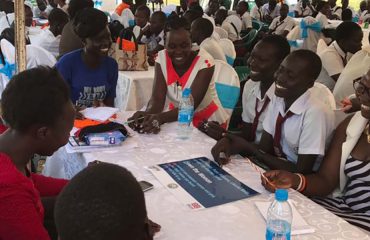